Words Matter: a researcher’s obligation to think before speaking. 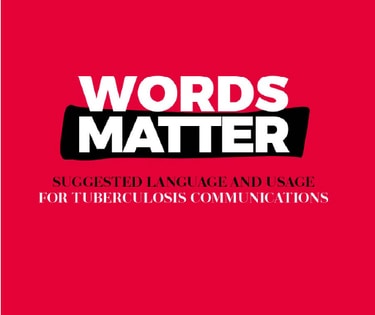 As a teenager, I always said that I would dedicate my life to something meaningful. No matter how big or small the contribution, I vowed to commit my time and energy toward the betterment of others’ wellbeing. I was unsure of the exact route I would take but I trusted myself to know that I’d recognize it when I saw it. One day, an opportunity presented itself to study tuberculosis (TB). After reading up on the topic, I realized that my meaningful contribution to this world arrived in the form of a microscopic, sausage-shaped bacteria, causing one of the deadliest and oldest diseases known to humanity – TB. Within a few months I was enrolled as a postgraduate student investigating TB in a clinical setting. This granted me unique exposure to a side of clinical research that many young scientists don’t have the opportunity to experience – the person behind the sample.

From a research perspective, it’s quite rare for a laboratory-based scientist to connect with a research participant in person.  Many institutions that conduct clinical trials and research studies usually have a structure whereby study enrollment, participant consent, and sample collection are performed by trained field staff. Thereafter, it’s common practice to have samples transported to a laboratory where they would be used in downstream protocols for testing and/or experimentation. Generally, samples are used in the form of de-identified specimens, meaning that a researcher doesn’t receive personal information that may reveal the identity of a study participant. This setup has proven to be highly efficient and streamlined for conducting rigorous, unbiased clinical research, while protecting the privacy and confidentiality of participants. However, no setting is without its shortcomings. In my opinion, the main drawback of such setups is the detachment of a sample from a participant.

When working with a sample, oftentimes the only thing we see as scientists is a barcoded vial containing a specimen. It is too often and too easily forgotten that behind every sample there is, or once was, a person. As researchers, we have a duty to always treat participants with respect, be it face-to-face during clinical trials or while working with their samples in the lab. One of the most important ways we can demonstrate respect for participants and samples is to use dignified, people-centered language when communicating our research, whether it be in the lab or in the field.

The recently published Words Matter Language Guide helps readers learn about the use of technical and conversational language in the TB field, while also providing a comprehensive index and glossary of key terms across themes including TB classification, epidemiology, prevention, diagnosis, treatment, systems, community, rights, gender, and emerging terms. Words Matter encourages the TB community to adopt non-stigmatizing, human rights-based, and gender-transformative language. The overall intent is to protect the rights and dignity of people affected by TB and promote consensus in the TB field. As such, this resource could be an equally powerful tool for TB researchers as well.

Researchers often use technical terminology as a fundamental tool to convey findings and communicate our research. Truthfully, our language forms a cornerstone of our vocations. While technical language used in clinical research may not have been conceptualized with the intent to harm or stigmatize, developed as a simple and consistent tool to communicate specialized content among experts and impart objectivity towards participants, many terms carry stigmatizing connotations. Therefore, it’s important for researchers to acknowledge that technical language does flow over into communities and has an impact on community engagement efforts. Ultimately, the words and phrases used in research may influence beliefs, social stereotypes, and stigma surrounding TB – the impact of which depends entirely on how we wield our language.

For too long, people affected by TB have been discriminated against. This has often led to social isolation or excommunication from families and communities. In this regard, the language used by researchers and healthcare workers can influence social stigma and may ultimately sway a person’s decision to seek healthcare and advocate for themselves and others, as well as shape a person’s reactions to research findings and willingness to participate in clinical research.  This is where the use of considerate and respectful language can be a tool to support, empower, and encourage individuals in TB-affected communities to participate in research and proactively seek out testing and treatment. It is also important to consider that words carry different meanings and nuances in different communities and across different local languages. Therefore, careful choice of words and phrasing centered on context is key to communicating effectively. It is essential that researchers and scientific experts be conscious and intentional with the words they use, whether in informal conversation or when engaging in dialogs involving policy, advocacy, or media. Regarding policy, researchers and scientific experts may be called upon to participate in decision-making dialogs, in which case a unified vocabulary is essential for enabling shared understanding and consensus between communities affected by TB, programs, governments, funders, researchers, stakeholders and others engaged in the TB field.

In closing, I encourage members of the TB research community to make the most of the Words Matter Language Guide – read it, engage with its contents, refer to it often, and encourage your peers to do the same! As our language evolves and changes over time, so too will the Language Guide. Use this living document as a tool to inspire discussion, debate, and reflection, with the sole intent to uphold the rights and dignity of those affected by TB. Whether we acknowledge it or not, language can influence ideas and beliefs. In recognizing the power of our words, may the research community choose language that is more conscious, intentional, insightful, and sensitive towards people affected by TB.